Tunneling to the Carpal Tunnel 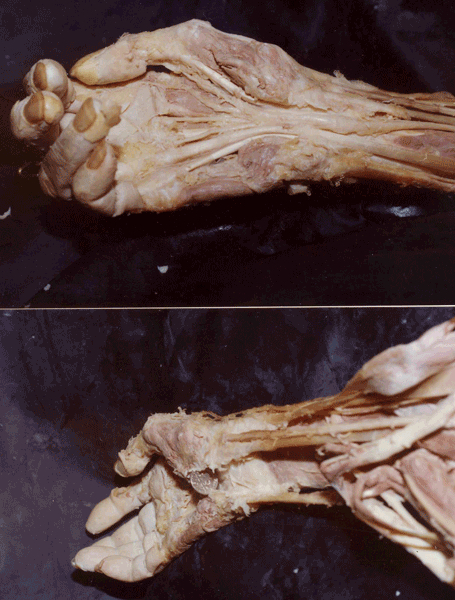 Pictured to the left is a human dissection of the Carpal Tunnel.  The top picture shows that the ligament covering the tunnel, the transverse carpal tunnel ligament, has been removed.  That ligament, that is not shown, is the one that is snipped, or “released” by surgeons, as a last resort to help reduce pressure on the nerves and tendons that pass inside the crowded tunnel.

In the lower photo, the tendons and nerves have been removed and a dime inserted into the tunnel to demonstrate how vulnerable the nerves are if the tendons around them are swollen.  These tendons are also subject to variations in system wide hormone balances.  For example, pregnant women are more likely to suffer CTS than non-pregnant women.

Despite the sometimes terrifying nature of CTS, its still tendonities, just in one of the worst possible places to get it!  Irritated, inflamed tendons anywhere in the body can be a “nagging discomfort” to “debilitating”, depending on severity.  Whether those tendons are under the bones in your foot (Pantar Fasciitis), or in your forearm as Tennis Elbow (Epiconcylitis), getting rid of the cause of tendonitis usually requires a multi-disciplined approach.  Prevention is, as usual, is far easier.  So arm yourself with the right knowledge starting with this FAQ.